Just behind the fifth toe, at the joint where the toe connects to the foot, a prominence can develop. This is called a Tailors bunion. It is caused by the abnormal function of the foot and can be slowly progressive. Some people naturally have an enlargement in this area. Shoe pressure can make the area painful and at times cause a bursa to form. A bursa is a sack of inflamed tissue that occurs over a bony prominence in response to excessive pressure of friction. The bursa is spongy to the touch and can be very painful. The bursa can be treated with cortisone injections to reduce the swelling and inflammation. Padding the area is also useful to reduce the pressure from the shoes. Selecting the correct shoe can also be helpful. Surgical correction of the tailor's bunion is a common procedure to reduce the prominence and the pain associated with it. 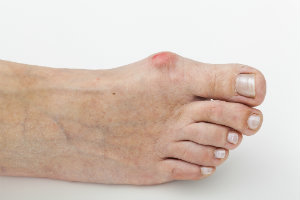 Surgical correction of a tailor's bunion is directed at reducing the prominence surrounding the fifth metatarsal. This can be accomplished by a variety of methods depending on the cause of the prominence. Soft tissue enlargements such as a bursa, neuroma or ganglion can be the cause and easily removed in a simple surgery. More commonly, this soft tissue enlargement is associated with an abnormality in the fifth metatarsal bone.

The fifth metatarsal bone can be prominent when the end of the bone, called the head, is enlarged near the base of the little toe. Surgical correction involves shaving the enlarged portion of the bone. The fifth metatarsal bone can also be prominent if it bows in the center. Similar to a bunion this is corrected by either shaving off a portion of the metatarsal or creating a surgical fracture and realigning the bone. In most instances the patient is allowed to walk in a surgical shoe following surgery. In extreme cases it may be necessary for the patient to use crutches for up to 6 weeks before allowing full weight bearing on the foot. As with nearly all foot surgeries, the patient is instructed to limit the amount of walking and standing the first few weeks following surgery to better ensure a good result. Typically the patient is instructed to keep the foot elevated during the day when possible. Return to work can be as short as one week and as long as six weeks depending on the amount of walking and standing required. Because surgery does not correct the cause of the deformity it is often recommended that following the surgery the patient wear a functional foot orthotic. These devices can be worn in normal shoes and correct the underlying cause of the deformity.

Most often the surgery is performed in an outpatient surgery center or hospital. Anesthesia for the surgery can be done under strict local anesthesia where that portion of the foot is anesthetized similar to a tooth during dental work. The local anesthesia is combined with intra-venous sedation to make the patient drowsy. General anesthesia can also be used if preferred.

Possible complications associated with surgical correction may include: infection, over or under-correction of the deformity, joint stiffness, healing of the bone in the wrong position, delays in healing and non healing of the bone and soft tissue. Not smoking will decrease the chances for complications. Keeping the dressings or cast dry is also essential to prevent infection. Infections are most common in the first three days following surgery, but can occur later in the recovery period.