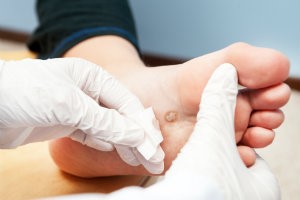 The common wart is known as verruca vulgaris. They are caused by a viral infection of the skin. This occurs as a result of direct contact with the virus. They do not spread through the blood stream. They occur more commonly in children than adults. When they occur on the bottom of the foot, they are called plantar warts. This name is derived from the location of the foot on which they are found; the bottom of the foot is called the plantar aspect of the foot. A common misconception is that plantar warts have seeds or roots that grow through the skin and can attach to the bone. The wart may appear to have a root or seeds, but these are in fact small clusters of the wart just beneath the top layer of the skin. The wart cannot live in any tissue except the skin. Moist, sweaty feet can predispose to infection by the wart virus. They can be picked up in showers and around swimming pools. They are not highly contagious, but being exposed in just the right situation will lead to the development of the wart. Avoiding contact in the general environment is nearly impossible. If a member of the family has the infection, care should be taken to keep shower and tile floor clean. Children who have plantar warts should not share their shoes with other people. Young girls often share shoes with their friends and this should be discouraged.

The warts have the appearance of thick, scaly skin. They can occur as small, single warts or can cluster into large areas. These clustered warts are called mosaic warts. They often resemble plantar calluses. A simple way to tell the difference between a wart and a callous is to squeeze the lesion between your fingers in a pinching fashion. If this is painful, it is likely that the lesion is a wart. A callous is generally not painful with this maneuver but is tender with direct pressure by pressing directly on the lesion. Othe lesions on the bottom of the foot that are often confused with plantar warts are porokeratosis and inclusion cysts.

There are a variety of ways to treat warts. The over-the-counter medications have a difficult time penetrating the thick skin on the bottom of the foot, so they do not work well in this area. Professional treatment consists of burning the wart with topical acids, freezing with liquid nitrogen, laser surgery or cutting them out. All methods have the possibility of the wart coming back. Surgical excision of the wart has the highest success rate with a relatively low rate of recurrence. There is some mild discomfort with this procedure and it takes several weeks for the area to completely heal. Normal activity can generally be resumed in a few days depending on the size and number of warts that have been removed. The risks associated with surgical removal of warts are the possibility of infection, or the formation of a scar, which can be painful when weight is applied while walking.

Laser removal of the wart works by burning the wart with a laser beam. The area must be numbed with an anesthetic prior to the procedure. There is little advantage to removing warts with a laser unless the warts are very large (mosaic warts) or there are a large number to be removed. The risks associated with the use of the laser are the same as for cutting the warts out. These risks include infection and the development of a scar after healing. A new type of laser has been developed to treat several different types of skin lesions called the Pulsed Dye Laser. This new laser has promise in the effective treatment of warts.

Freezing the wart with liquid nitrogen is another form of treatment. This form of treatment when the warts are on the bottom of the foot can be very painful and take several days or weeks to heal.