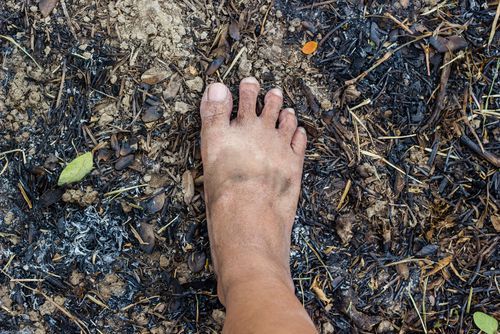 Tarsal Tunnel Syndrome is due to compression of a nerve called the Posterior Tibial Nerve. We now know that there are three to five more tunnels to be identified and addressed;that of the medial and lateral plantar nerve tunnels and the one to three branches of the medial calcaneal nerve tunnels as well. The nerve passes into the foot from around the inside of the ankle just below the ankle bone. Just beyond this point, the nerve enters the foot by passing between a muscle and a bone in the foot. This area is called the Tarsal Tunnel. The Posterior Tibial Nerve is the largest nerve that enters the foot. At the level of the ankle, the nerve branches out like the branches of a tree as it goes out toward the toes. This nerve supplies most of the sensation to the bottom of the foot and the muscles in the bottom of the foot. When pressure is placed on this nerve, a burning or numbness will be experienced on the bottom of the foot. The area of the bottom of the foot that is affected can be variable. Most commonly, it affects the outside portion of the bottom of the foot. It can also affect the toes, mimicking a neuroma. The most common cause of Tarsal Tunnel Syndrome is a flat foot or a foot in which the arch flattens excessively while walking. Over time, this causes the nerve to stretch or become compressed in the area of the tarsal tunnel. The condition is slowly progressive and occurs more commonly after 30 -40 years of age. Other causes of Tarsal Tunnel Syndrome are the formation of soft tissue masses such as ganglions, fibromas, or lipomas that may occur in the Tarsal Tunnel and cause compression of the nerve. Also, small varicose veins may form around the nerve that can also cause compression of the nerve.

Flattening of the arch of the foot is due to an abnormal function of a joint complex called the Subtalar Joint. This joint complex is located just below the ankle joint. When this joint allows the foot to flatten excessively, the foot becomes over pronated. Pronation is a normal movement of the foot, but when it occurs too much of the time, it causes several different problems to occur in the foot, one of them being Tarsal Tunnel Syndrome.

Diagnosis of Tarsal Tunnel Syndrome is made by physical exam and the patient's history of their complaint. A history of gradual and progressive burning on the bottom of the foot should alert the doctor to the possible diagnoses. Physical exam will often reveal a flat foot or over-pronation of the foot that is observed when the patient walks. Observation of the area just below the ankle bone on the inside of the ankle may reveal a slight swelling. Tapping (or percussion) with the tips of the fingers but not a neurological hammer in this area, may reveal a tingling sensation in the bottom of the foot. X-rays may be of little value, because they will not show the nerve or reveal any evidence of soft tissue masses. X-rays may be useful in determining the extent of pronation of the foot but only if the x-ray is taken with the patient bearing full weight on the foot.There have been recent reports of MRI identification of tarsal tunnel but this is not dependable and is expensive unless the doctor wants to reveal the existence of a soft tissue mass. This generally, will not demonstrate any damage to the nerve. Nerve conduction studies will reveal if there is damage to the Posterior Tibial Nerve, but will be negative in the early stages of the condition. The most reliable at 98%, is the PSSD or Pressure Specified Sensory Device devised by Johns Hopkins School of Medicine Professor, A. Lee Dellon. This instrument is certified and used in Dr. Parkers office by his trained and certified technicians.

Other conditions that may cause similar symptoms are diabetic neuropathy, alcoholic neuropathy, or nerve compression at a level higher than the ankle. Poor circulation can also cause burning of the feet. If you experience these symptoms, you should consult your doctor at the earliest possible time.

Treatment of Tarsal Tunnel Syndrome is directed at correcting the abnormal pronation of the foot. This is accomplished with functional foot orthotics. These devices are custom-made inserts for the shoes that correct abnormal function of the foot. Treatment with oral anti-inflammatory medications, vitamin B supplements, or steroids may provide some benefit, but are rarely curative. Calf muscle stretching can be useful, because it eases the tension and strain about the ankle joint. If the Tarsal Tunnel Syndrome is caused by a soft tissue mass, then surgical removal of the mass may be necessary.

Surgical correction of Tarsal Tunnel Syndrome in the absence of a soft tissue mass previously, had a very low success rate (40-60%), but now with newer techniques releasing two to three more tunnels give a much higher success rate (85%+) than previously experienced. This surgery, a more extensive procedure than the simple Tarsal Tunnel Release, is intended to release the pressure on the nerve by freeing not only the soft tissue structures about the nerve as it passes through the tarsal tunnel; but, the medial and lateral plantar nerve tunnels and the one to three branches of the medial calcaneal nerve tunnels as well.

This surgery does not correct the over-pronation of the foot, however, and functional foot orthotics should be worn following the surgery.When there has been significant damage to the nerve, permanent nerve damage or axonal loss may be present. In this case, a complete cure is very unlikely, and treatment is directed at easing the symptoms. Dr. Parker can use certain medications available, by prescription that may be beneficial for the burning pain that may be experienced at night. Time is of the essence, the longer a nerve is compressed, the greater the chances of axonal loss or axonal death and the less the chances of reviving or saving the function of the nerve.