There’s a reason dogs make such great pets. They fill our lives with joy and every day they prove their loyalty and companionship.

What dog owner wouldn’t go the extra mile and do everything they could to help their best friend?

That’s what Dr. Parker did for his wife’s dog, Lacey. And the results are just another example of what he could do for you if you suffer from foot or ankle pain. (Seriously.)

But before we explain, first things first. This is Lacey. Isn’t she just the cutest pupper you’ve ever seen? You know she is. 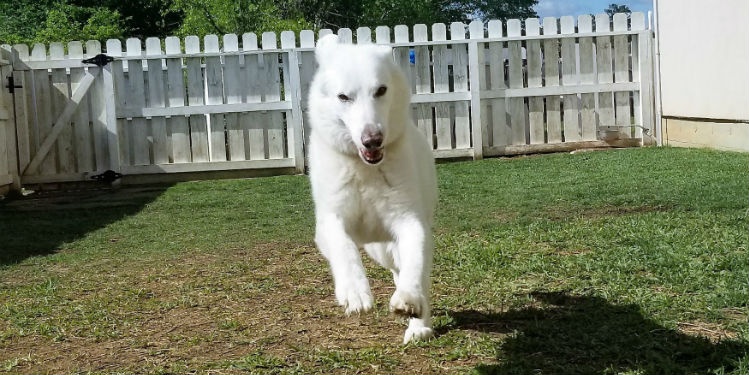 Who’s a good girl? YOU ARE, of course!

Unfortunately, near the end of last year Lacey was struggling with her mobility. In fact, in a very short time frame, she went from running and playing like a normal dog, to being almost completely paraplegic in her hind legs. Her right paw was totally paralyzed and dragging, while the left was so weak she couldn’t even stand.

Even with the aid of mobility harnesses and a wheelchair, Lacey still had an extremely difficult time getting around.

Dr. Parker and his wife, Pam, took Lacey to see the veterinarian. Lacey was diagnosed with degenerative myelopathy—a bleak prognosis. At this point, the vet suggested putting Lacey down as a serious option. (In fact, the veterinarian knew all too well what we were going through—his own dog had succumbed to the same disease.)

However, as the vet was leaving, Dr. Parker noticed a “stem cell” treatment on the clinic door. And that got him thinking.

See, at Parker Foot & Ankle, we use stem cell derived growth factors from umbilical and amniotic tissue all the time to treat serious medical problems, including systemic nerve damage and disease. And the results have been incredible. Time and time again, we’ve used these procedures to restore health and function to damaged tissues and allow people to return to their more active former lifestyles.

Why wasn’t this suggested as a treatment option for Lacey? According to the technician, due to the low odds for success, it could not be ethically suggested by the vet.

However, we’ve seen this kind of treatment work for humans. And Dr. Parker was convinced it could work for Lacey, too. He and his wife were more than willing to give it a try.

Dr. Parker proposed that the veterinary surgeon perform the standard IV stem cell therapy, as well as add the stem cells locally with an injection near the spinal cord, where the nerves to the extremities exit focusing on the worse extremity that being the right. Although the veterinarian felt the odds of success were still less than fully encouraging, he agreed to perform these procedures. 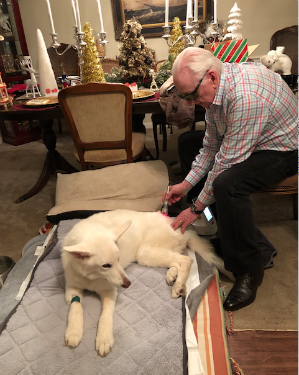 Lacey had her first treatment on New Year’s Eve—December 31, 2018—followed by a full 12-session therapy course.

And something incredible happened.

Within three weeks of her first treatment, Lacey was walking again. The right paw was still knuckling a bit, but the left was almost completely back to normal.

And as of March, she’s running and playing, completely free from functional disability. There’s only a tiny remaining “clipping” of the right hind foot that isn’t getting in the way of normal activity. Furthermore, the “clipping” is in face a form of drop foot and Dr. Parker is now in conversation with the veterinarian considering whether a nerve release procedure, similar to the surgery he performs for drop foot and in humans, could clear this minor clipping as well.

Now, there’s still a lot we don’t know here. It remains to be seen whether symptoms are gone forever, or if they return—and if so, how soon and how quickly. We don’t know whether she’ll need another stem cell infusion, or if one would even be worth the cost.

But let’s not lose sight of what has been accomplished. Lacey was paralyzed, and probably to the point where most dogs would be put down. Three months later, she’s running, playing, and enjoying a high quality of life. However long it lasts, we’re delighted to be able to spend this time with her.

What It Means For You

Now, dogs are dogs and people are people. Just because a treatment works for Lacey, or Fluffy, or Rover doesn’t mean it’ll work for you, too.

But having said that, our anatomy and physiology really aren’t so different. After all, there’s a reason nearly every breakthrough treatment available for you or me was, at one point during its development, tested for effectiveness and safety on animals. (In fact, the FDA actually requires it before approving any drug trials for people.)

In other words, we were confident that this treatment would be safe for Lacey and that, despite the low odds, it would really give her the best chance to recover and walk again. We were confident because we’ve seen up close what it can do for our patients.

And likewise, Lacey’s story should encourage you that, at Parker Foot and Ankle, we really can do incredible things to help you recover from chronic pain, neuropathy, and other conditions that were previously thought to be irreversible or would require surgery.

We treat our patients like family here. Just ask Lacey.